US tightens H-1B visa rules, Indians to be hit hard

BENGALURU: The Donald Trump administration has just made it more difficult for companies and individuals to get H-1B work visas. And even if one gets it, it may not be for a full three years, as has been the practice. Indians and Indian IT companies will feel the impact the most because they are the biggest users of this visa. The shorter durations may even make the transition from H-1B to a Green Card next to impossible.
A policy memorandum issued by the US Citizenship & Immigration Services on February 22 said its officers could seek detailed documentation and more evidence from firms to establish that they have specific assignments in a specialty occupation for the H-1B beneficiary, and that they have these assignments for the entire time requested on the petition. 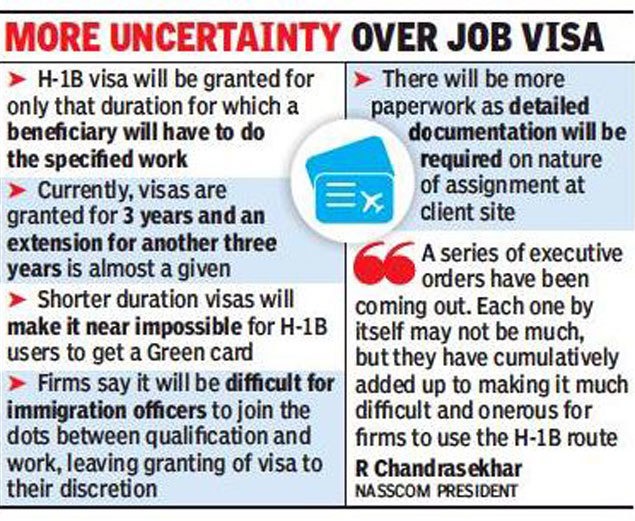 If the company is able to only demonstrate that the beneficiary will have the specified work for less than three years, the visa would be granted for that lesser period.

Currently, H-1Bs are issued for three years, and, for a long time, they were extended for three years with few questions asked. Over the past year, the administration has made the process of extension more difficult, compelling Indian IT firms to tell employees on H-1Bs that they may have to return earlier than anticipated. The new rules imply that one may not even now get the initial full three years.

IT association Nasscom’s president, R Chandrasekhar, said it would be complicated for an immigration officer to establish the connections between qualifications and tasks, and that in practice this would bring in an element of subjectivity. “The implication of this is there will be a lot more paperwork. A series of executive orders have been coming out. Each one by itself may not be much, but they have cumulatively added up to making it much more difficult and onerous for companies to use the H-1B route,” he said.

“The new policy suggests, however, that additional evidence may also be needed, such as more details in the work orders or in letters from the end client regarding the beneficiaries’ work assignment. While all these issues in the new USCIS policy are already asked for in challenges to the H-1B petition known as Requests for Evidence, it provides more incentive for USCIS to ask for more evidence regarding the specific nature of the H-1B worker’s work,” he said.

A consolation is over the past two years, Indian IT’s dependence on H-1Bs has come down sharply, partly through efforts to hire more locals. All major IT companies have plans to scale up the local hires.

Nasscom vice-chairman Rishad Premji said that Indian IT firms use less than 20% of the 65,000 H-1Bs issued each year. Chandrasekhar said “in the last two years, the number of visa applications filed by Indian IT firms dropped by 50%”.Chandrasekhar also noted that the US has a shortage of STEM (science, technology, engineering and math) workers and these measures on H-1B could end up hurting American firms that Indian IT companies serve.