Modi may finally crack the job code in this Budget

Job creation is a major challenge for Prime Minister Narendra Modi. He promised to create 10 million jobs a year during his campaign for the 2014 Lok Sabha elections. While nearly 10 million Indians enter the workforce every year, emerging technologies such as automation and artificial intelligence are expected to take away jobs in several sectors.

Lack of enough jobs, especially when the Indian population is predominantly young, is an issue that cuts across the divides of rural-urban, caste and religion. That’s why it has the potential to harm the electoral prospects of the ruling Bharatiya Janata Party (BJP) in the next general elections in 2019 and also in several state elections scheduled this year.

Budget 2018-19 is an opportunity for the Modi government to address issues that might hit the BJP’s electoral base, and lack of jobs could be one such issue. The pace of job creation fell to a six-year low in 2015 with 135,000 new jobs being created compared with 421,000 in 2014 and 419,000 in 2013, according to a quarterly survey of industries by the Labour Bureau of the labour ministry. 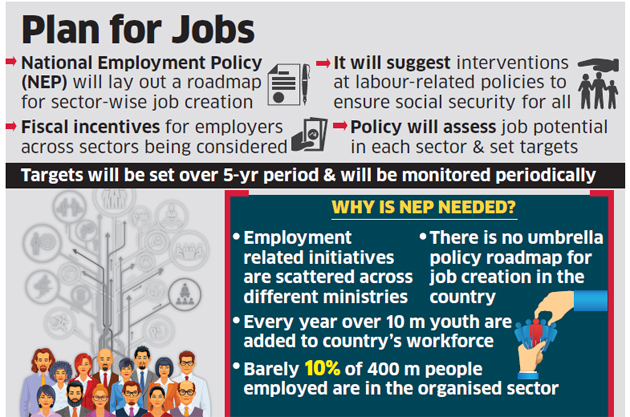 The recent Gujarat elections showed erosion of the BJP’s rural base in the state. Farm distress was seen to be the main cause but lack of enough jobs could also be a big reason. Since this could be Modi’s last full Budget before the next Lok Sabha elections, it is likely to address key issues that can have big electoral impact. While the government is expected to address farm distress in the Budget, the next big issue could be jobs.

There are indications that the government will make major announcement regarding jobs in this budget. A national employment policy is likely to be announced in the Budget. The policy will outline a comprehensive road map for creation of quality jobs across sectors through economic, social and labour policy.

An ET report cited an official saying that the policy would moot fiscal incentives for employers across labour-intensive sectors to create more jobs as well as employees to get engaged in the organised sector as this would fetch them minimum wages and enough social security.

Since most of the jobs being created are in the informal sector, the policy would seek to reverse this trend. About 90 per cent of workers are engaged in informal employment, not covered by any social security law and most likely not getting the minimum wage.